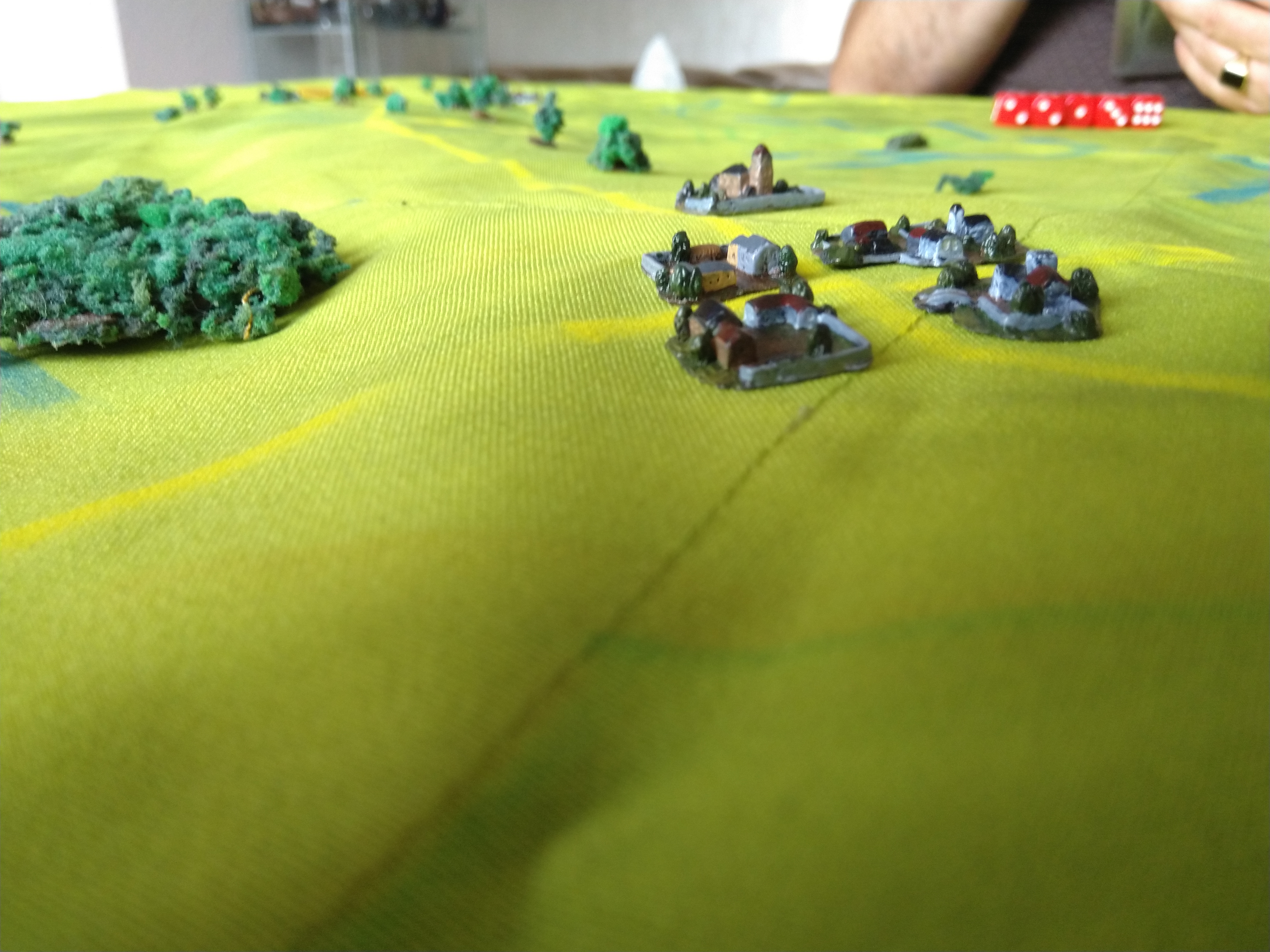 Last week we played the Battle of the three roads I posted earlier on. I did not have time to do more preparation. So we just decided to play the scenario, with the rules from the 2-by-2 rule set. I try to describe the changes we made below.

We used the map as shown on top. We copied it to the gaming cloth I made. Unfortunatly I did not have enough forest to cover all the forest, so those had to be drawn in. We didn’t include a lot of terrain rules from the scenario. Skipped the weather section. We used the following rules:

The passing trough the water at the top left is fordable, on a 5+ for infantery, and on a 4+ for horses. The French did have a pontoon brigade, which could construct a bridge, allowing easy passage. On a 1-3 it would take 1 turn to construct the bridge, on a 4-6 it would take two turns. Optionally it could be tried to build a bridge on a different spot, but only on a 6+ they would find a suitable spot.

For deployment, the British would deploy most forces as wished for in the op third of the map. And act as defending forces, only a small portion would act as reinforcements. For the French would start with a small force on the table, and would have to wait for reinforcement every turn. The total French force was larger than the British, but due to the slow reinforcements the British could defeat them small batches.

The goal for the French was to leave the map with an as large as possible force, at the two exits at the top, behind the river. The British should prevent this. The French did have two corps, every corp would rout if 3 or more units were destroyed. (acting independently from each other). The British side would route if 6 or more units were destroyed.

The British were divided in three main forces:

The French had two Corpses

As you can see in the forces list, the French are numerical superior, but the British do have slightly better infantry units. Combined with their deployment advantage, we hoped this would match them up evenly.

This resulted in a firefight and artillery bombardment at both sides of the bridge. (See F on the map)

On the other side the corps did get confused with the heavy cavelry moving close by, and was in the end locked in at the forest at E. After a couple of turn this force started to break, and even some cavalry reinforcements, did prevent the collapse of this front.

On the other side things started to look better, when the first regiment formed a bridgehead at the other side. But reinforcment and relieve couldn’t bring in quick enough. Resulting in a stalled fight. The British which defeated the forces at E now diverted to the bridge, making the situation very risky for the French. A quick break through didn’t happen, and a major retreat had to be called by the French.

This was a real fun game. I had quite a busy week, and did not have a lot of time in preparation. And we had to decide the rules of the scenario at the beginning. But the rules flowed very well, felt quite even matched and did give a nice gaming night. In hindsight I should have focused on one attacking location, and combined the two corpses on the left side (D), hoping to tumble the fronts one, by one. I think we will play more of these games in the future.