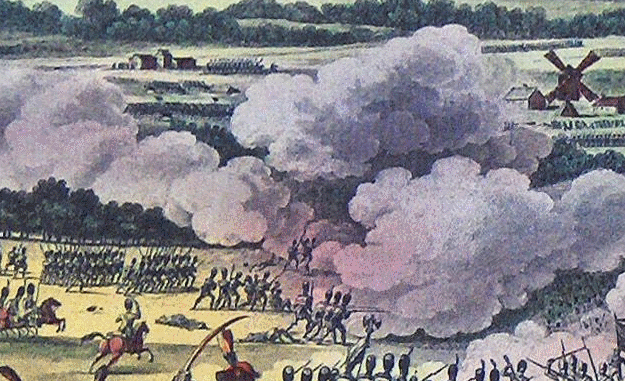 Recently I was searching for a follow-up on the Battle of Cinq Bras. I just searched for wargame scenarios in google, and stumbled upon the deepfriedhappymice website.

They do have a nice collection on Napoleonic wargame scenarios for Grande Armee. One of the scenarios is appealing, and hope I can convert it to the 2-by-2 wargame rules we are using. The Scenario is called The Battle of Three Roads, and is a hypothetical alternative history, were Napoleon did not attack Wellington at Waterloo, but started a maneuvering war threatening the supply line and the left flank. Trying to defeat the enemy in detail. (Original scenario)

It is not possible to use all the terrain rules and reinforcement rules as written, but the map and the forces are possible to use. I have colored the map, and made it square, to fit my purposes. And also added some towns, to complete the terrain.

For the forces, I have to look on what I have available. I do have some pontoon bridging models in my stack, so probably need to finish them quickly, as engineering platoon. For the rest I need to check the available forces, and find some way to create labels.

Hopefully we can play this scenario at the end of July.