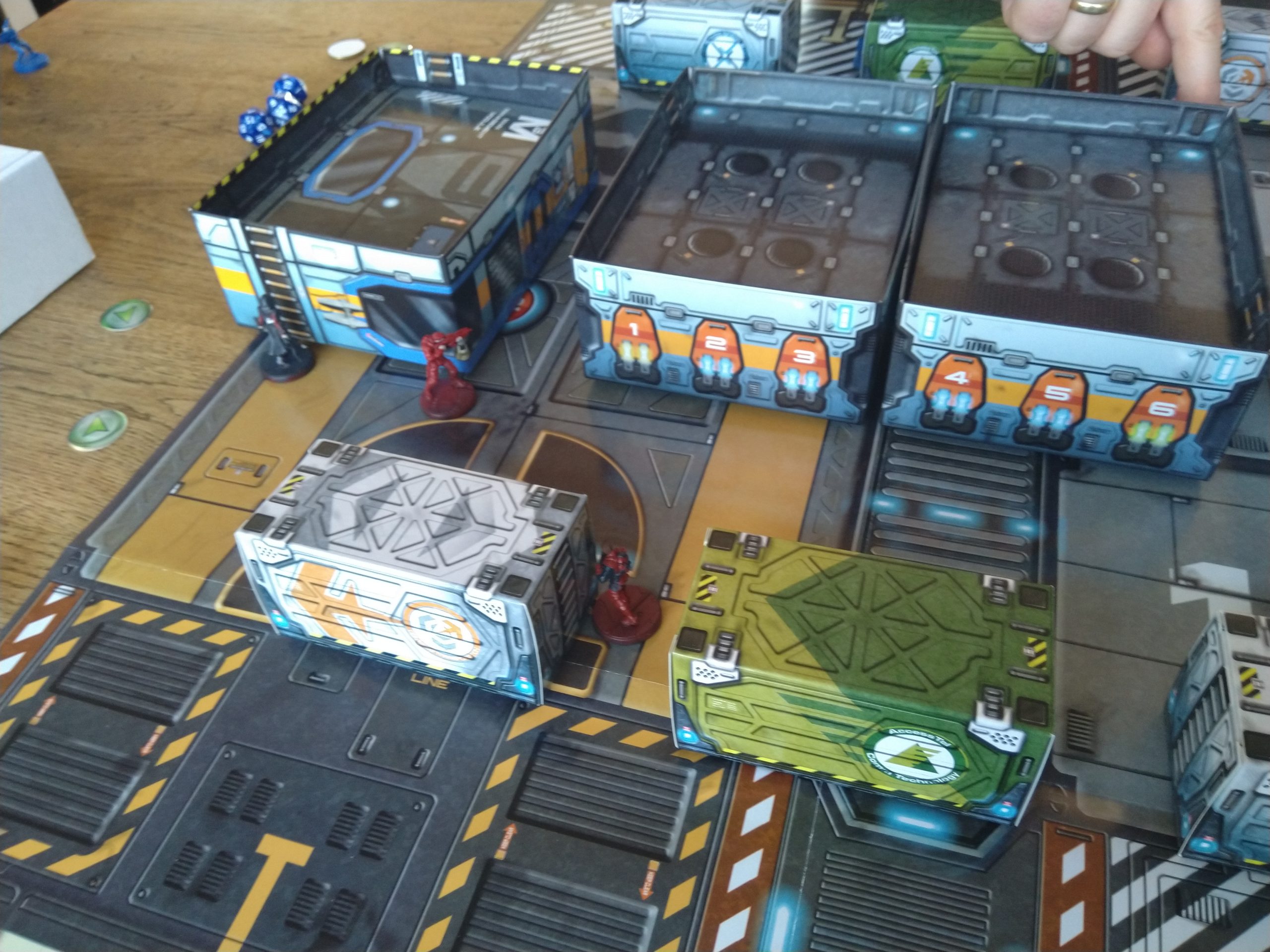 Originally I had planned to play the first two battles of the campaign. But it is nicer to play with an opponent. So Sunday morning after service, we could play a nice game of Infinity. I have not completely finished the painting the miniatures, but colors are blocked in, so it is easily recognized who is who.

I have the operation Icestorm box. In these starter sets is a seperate booklet for the rules. These does not contain all the rules. ( The complete rules can be downloaded on the Corvus Belli Website.) But rather have introductonary missions, which tell the rules bit by bit. Beginning at a very simple level. We played mission one.

The mision introduces to the basic concepts of the infinity system.

For this they only allow to use a basic character, with the same weapons. Maps are equal for both side, and both start with 3 soldiers. There is a lot of fluff and story on naming the different troops, but for now, they are just basic soldiers. The Red are the Nomads, Blue is Panocean. The PanOceans are sligtly better at shooting, for the rest they are similar.

We both started without any idea what we where doing. Just playing around and testing what can be done. My father played the PanOceans, I played the Nomads. We started with a small firefight. The first casualty was a PanOcean soldier..

At that moment we began to understand the system. My father tried to flank my troops form the other side. This resulted in an attack, were my troops were caught in the open. This resulted in a Nomad casualty. Luckily the source, was quickly dealt with, but another PanOcean rounded the corner.

At that moment we tried out dodging. resulting in some firefights, with a second Nomad casualty. Making the stand even. I tried to find cover from the roof, and we ended in a firefight. After three turns, I was the lucky one, to land the killing shot.

All in all, it was a nice game. I am looking forward to play the next mision, and think it is an enjoyable game. My father did like the game, but doesn’t like the sci-fi setting that much. He would probably prefer a ww2 themed version (which might be doable, if you don’t use all the special abilities, and a little more troops.

I hope to play some more games in the future, and finish the models some time. But don’t expect much progress on the short term. Hope I can play some campaign games this week.

On Crisis 2019 I obtained a box of Corvus Belli Infinity Operation Icestorm. Or actually half the box, the Pan Oceania is missing, but the terrain is still in. (It was second hand, so price was also appropriate.) Also included was a starter set for Infinity Nomads, totaling in 13 Nomad miniatures.

I probably will end up to paint the starter set in blue, to proxy as Pan Oceania, to do some playing in the end. The Operation Icestorm ones, hope to finish in the Nomad red scheme, as on the box.

After assembly I have started with a black undercoat. Yesterday evening I tried some airbrushing, but it did clog up. So couldn’t get any progress. I hope to continue in the weekend. Hopefully some progress to show next week.