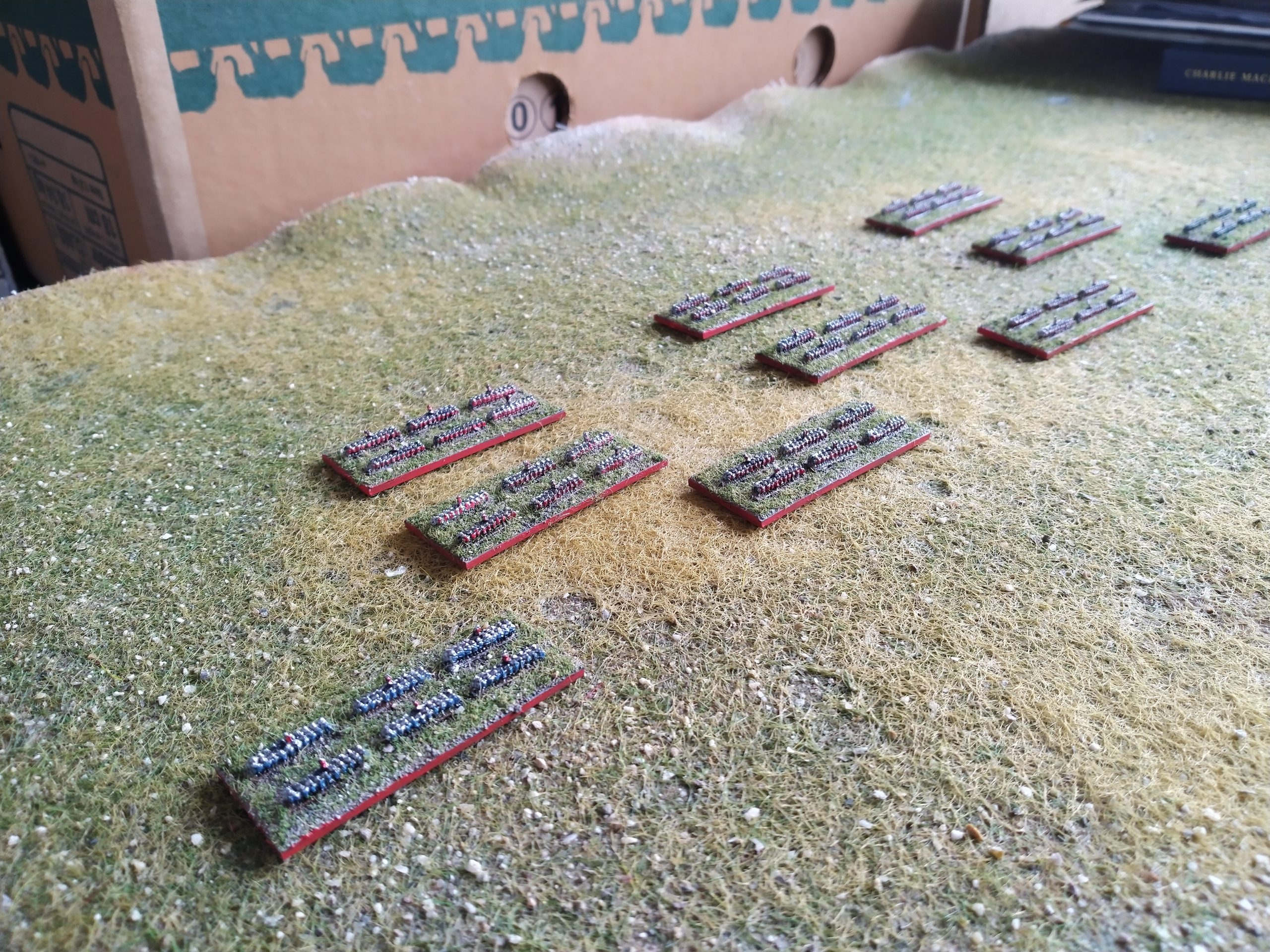 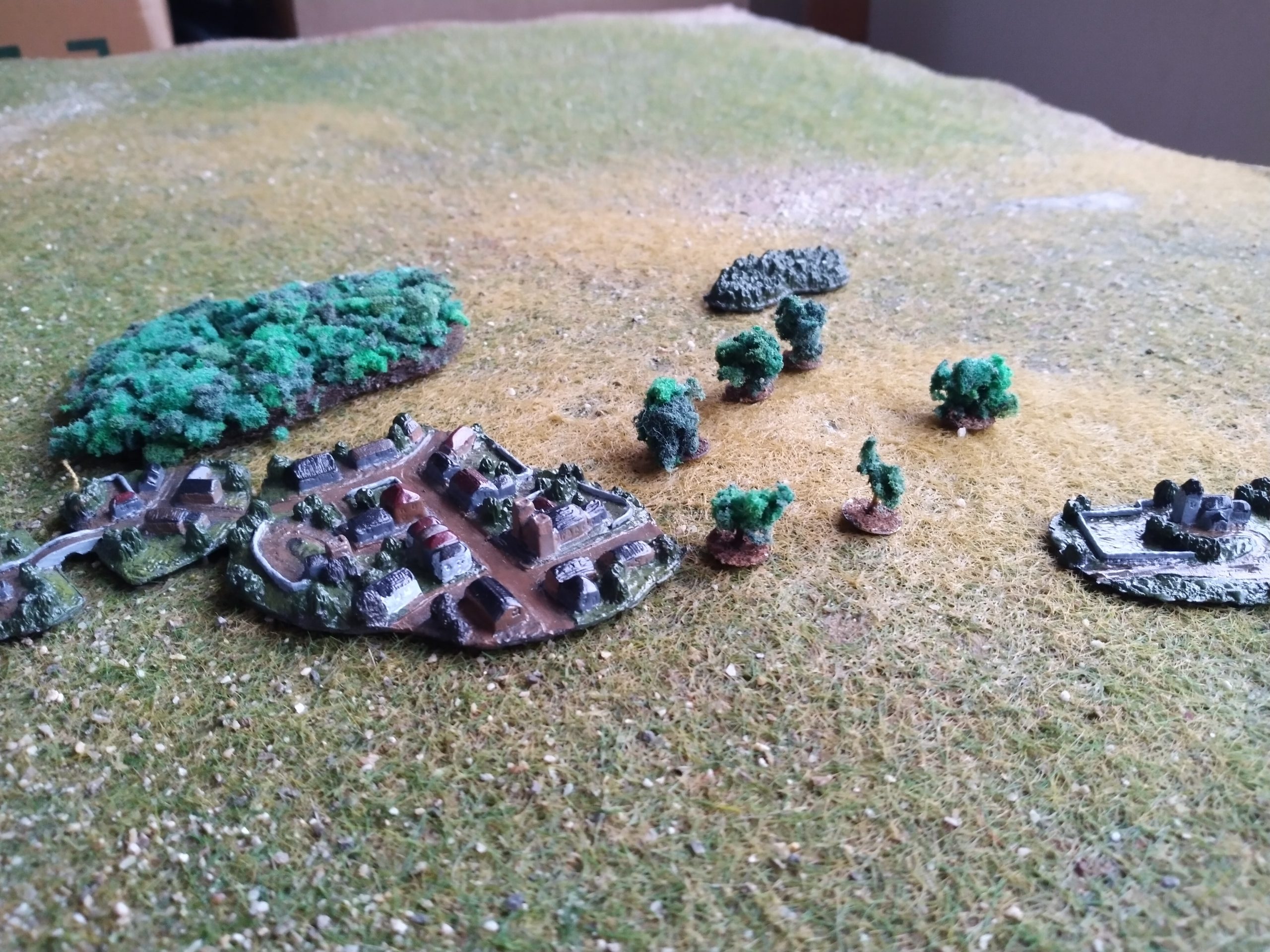 The terrain mat has been finished. After the second layer, I have drybrushed all the details with a light fleshy color. Then put some variation with a dark brown wash. But used it more like a filter. Creating a very patchy color.

Next step was the flocking. A mix different short grasses and some turf and sand. Just made some different mixes and applied then with a seave. After that I applied some extra sand to create some rough pathes.

I am very happy with the result. I can roll it up to around 20cm diameter to store away. And use it both for 10mm as 2mm and bigger scales if I want to. Now up to the next part of the terrain. Some more forest, roads and waterways. But for these I need some new ideas, to get some visible pleasing results.

Last week I played some Missile Threat in the Falklands with my father. As I was painting the house, I did not have time to write this report earlier.

The scenario is loosely based the attack of the HMS Glasgow (type 42) and HMS Brilliant (type 22). Forming a Type 42-22 combo. In our scenario the two ships are patrolling, with two harrier on CAP mission in the vicinity. The Argentinean are planning two attack with two flights of two a-4 Skyhwaks and a flight of two mirages. All equipped with bombs. The Skyhawks are coming in low (level 1) over land, to avoid detection, and mirages are entering on just cruising height somewhat behind.

Because the Harrier where some distance away they would not intercept before the first attack. Therefore the first pair of Skyhawks came in low and fast and took the ships by surprise. Damaging the HMS Glasgow, keeping her crew occupied with saving the vessel. So already the air defense of one of the ships was taken out. The Harriers had closed in, and on of them fired a sidewinder on the first pair, from a large distance. This missile tried to track them but was in the end out ranged, and missed. The second harrier spotted the other two waves and tried to get a advantageous position.

The Harriers started to get behind the multiple attackers. Performing some advanced maneuvers to align their guns. They got some hits, wounding one of the Mirage pilots. But this was not enough to stop them, and the Mirages sunk the HMS Brilliant on the next attack. One of the Skyhawks was less lucky, and got shot down after it already had released its bombs.

Then the fight was over quite quickly, the Harriers went back to the carrier as there was nothing to defend, and the Argentineans went home bingo on fuel.

This was a good scenario, we had hoped the ships would have a bigger impact with their air defenses and that is why the British lost so much. Therefore this was a mayor victory for the Argentineans, as they only lost one Skyhawk, but sunk to ships.

The Missle Threat rules are very interesting and fun to play. But sometimes a little challenging to remember all the pilot actions. (When to perform a pilot check, and which attacks are allowed on which moment) Only the missiles feel a little strange. IR guided missiles are much easier to fire. And do not perform that much differently than radar guided ones. So it is very beneficial to have IR missiles over radar guided ones. Probably will play more games in the future. Hope to do also some solo campaign with the Ethiopian air force.

After priming the planes yesterday, I have done a quick painting session this morning after church. I have painted the two Skyhawks and two sea Harriers. I am happy with the results. I could have worked longer on the details, and the free hand markings are not completly streight. It does look the job, and on table will probably look fine.

The inspiration for the colors did came from a decal manufacturer which has a lot of decals of unknown conflicts. Allthough these decals are for a different scale, the instructions on his website were a good guidance.

Maybe I will paint some extra details, like the exhaust and wheels on the Harriers on monday. But probably will spend some time on creating a scenario.