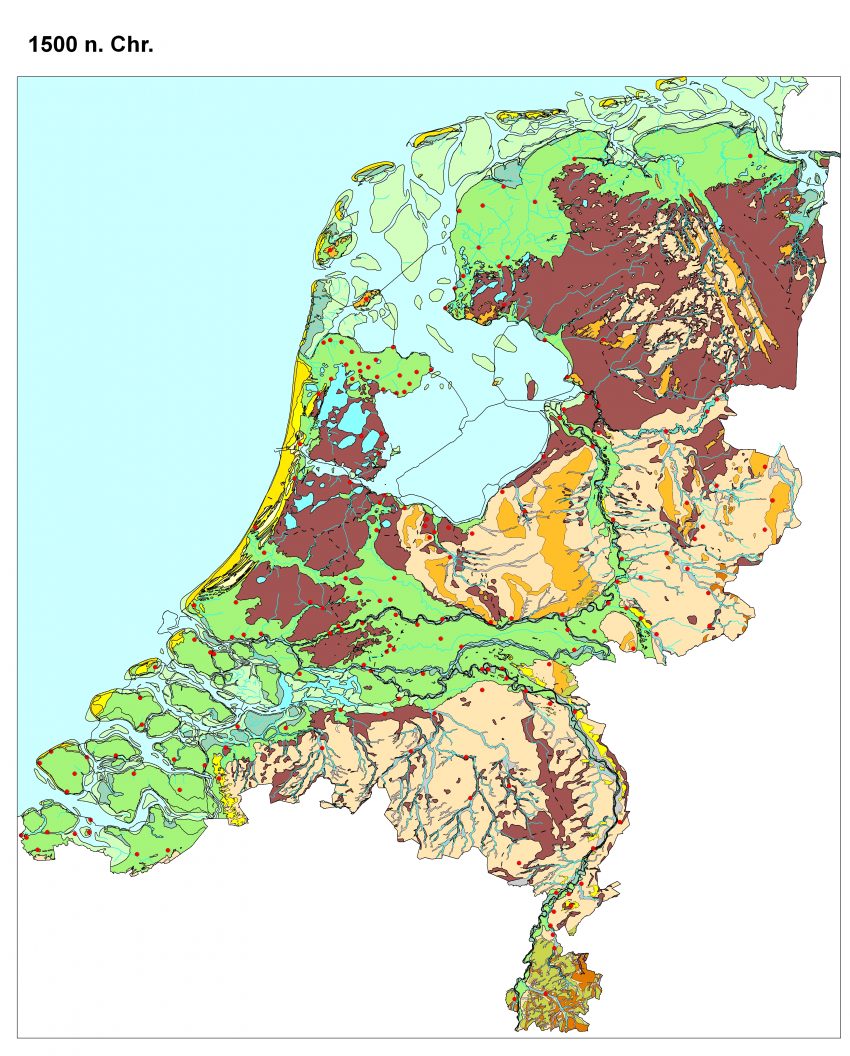 The origin of the Dutch landscape

In this post I hope to provide a quick overview of the history of the Dutch landscape.

The Netherlands before the Roman occupation was partly sand and partly a marchy, swampy peat landscape. The southeastern parts (in light yellow and ochre) is higher and mostly consist of sands. The west and north is mostly covered in peat (reddish brown) with some swampy areas and streams (light blue and light green). Historical there is not much known on this area. There are some hunter gatherer communities, as found from archeological digs. But there is not much recorded on what actually happened.

During the roman occupation, or annexation, the cultivation of the land was started. They dried out the peat areas, to create farmland and to obtain fuel. this started around the bigger streams and rivers. As these were used as way of transport. And where the ancients highways. Most roman forts are found next to the rivers. The drying can be seen in the peat areas which are getting smaller.

Up until the medieval times, the cultivation continued and the large peat areas were getting smaller. The additional effect was, that the land was getting lower. When peat dries, it will shrink. Also it will start to rot, reducing the height level of the land. This is important in the next few ages, as it will increase the risk when a flood happens.

After multiple floods (between 1000-1200 AD) the sea has reclaimed some lands. The zuiderzee (southern sea, nowadays mostly called Ijselmeer) has increased in size, and the northwestern part of the Netherlands is a lot smaller. To reclaim the land of the sea multiple projects are started to make polders. This will continue the next centuries, with hightpoint around the 17th century. But also the modern day Flevoland has been reclaimed from the Ijsselmeer, as shown in the above map, with the projected contours.

The next step will be to focus on the Gelderse vallei again. Located in the middle, just below the Ijselmeer. Some large peat areas are still present, providing some economical interest.

Quite recently I have been listening some podcast about the Dutch history. This quite interesting with a lot of information, and gives a quick overview of how the swamp land had grown into the Netherlands.