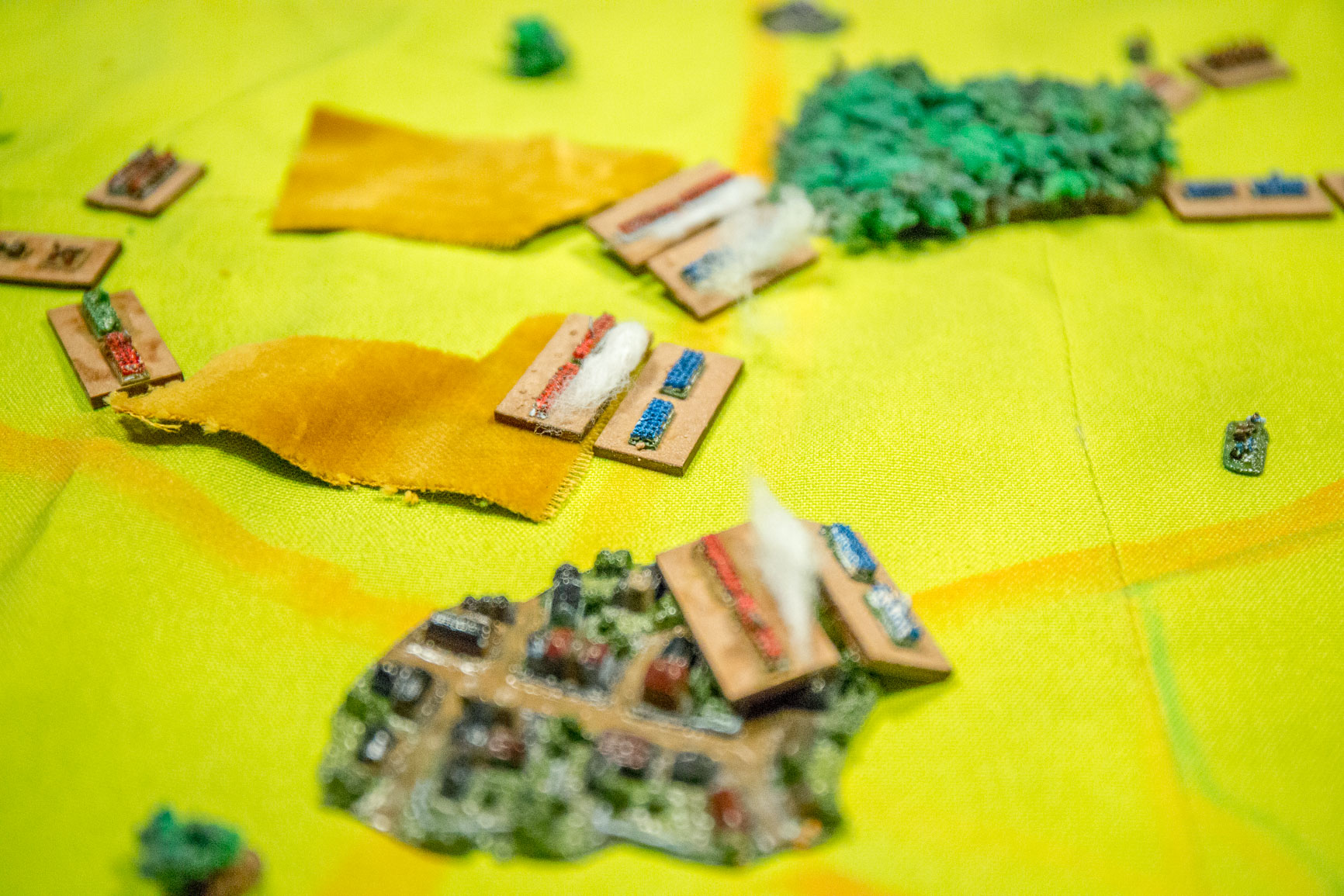 Last Tuesday evening, the first 2mm Napoleonic battle took place. This is a short battle report. My father was the opponent, playing the British (red) force and I was playing the France (blue) force. When I explained the rules and used a real life example of Quatre Bras, my wife, passing by, noted that on this battle field it are 5 roads. Therefore the battle took place at the fictional place of Cinq Bras. For the rules we used the 2-by-2 Napoleonic rules of Rodvik. Only the the area was actually 60cm by 60cm (sorry I do like metrics better)

As this is the first play of the rules, we just opted for the example forces as described in the rules.

The rules put a large incentive on “flow of battle”, which means that over time the different units will arrive onto the battlefield. As result at the beginning of the battle you do not have control of your full force, and you hope the reinforcements arrive on time. Which was also seen in a lot of historical battles.

As result the first few turns did not have a lot of actions, but a lot of movement and shuffling into position, to gain some advantage. The action finally started with a short skirmish of some reinforcement regiments which met each other. The Bristish troops were disrupted and routed to the Riquevalle farm, and stayed there the rest of the game. And the French regiment kept shooting from a distance, and was pinned for the rest of the game.

Then the tension rose at the center of the field, as the lines closed near Cinq Bras. Who would be the first to break. The British tried to use the village as vantage point and the French kept a line up to the nearby forest. The French saw the British walking in the village, and before they could a solid position, a bayonet attack was called. Also the two other regiments stormed forward attacking the British at the farm and in the grain fields.

The French should have hold on longer, and two regiments were quickly defeated, but Cinq Bras village was secured and a position was taken at town center. The gap in the line was put tight with the artillery positioned at the North-East road.

At the other side of the forest (West), some back and forth fighting took place between a couple of infantry and cavalry regiments. And especially the British reinforcements started to dripping in. The cavalry tried to desperately force its way through the lines, to lighten the threat on Cinq Bras village. But did not succeed.

And with five regiments lost for the French and only two for the British, the British did have a mayor victory, capturing the town, and securing a Bridge head French side of the river.

The game was a good starter game. And both did have a good lot of frustration as troops were not possible to do exactly as you wanted. Especially if they start firing or get disrupted, and how to reorganize them.

For this first time a lot of luck was involved, as we still need to get some feeling, on when to use the different units and if it is better to wait or attack. hopefully a next game in a couple of weeks.